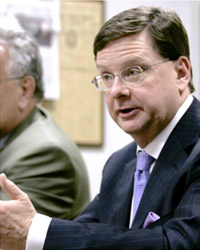 Bill Brandt has been in the business of workout, turnaround and insolvency consulting for more than thirty-five years and is widely recognized as one of the foremost practitioners in the field.  He is President and CEO of DSI.  During Mr. Brandt’s long and storied career, he has served in a chief executive, leadership or fiduciary role in over 7,500 matters, many of which involve household names such as Southeast Banking Corporation and Mercury Finance Corporation, as well as the Ebbers Asset Trust, Coudert Brothers, Florida Park Banks and the scandal-plagued Ohio Coin Funds.

Mr. Brandt was the principal author of the amendment to the Bankruptcy Code which permits the election of trustees in Chapter 11 cases.  By Gubernatorial appointment, he is serving his third consecutive term as Chairman of the Illinois Finance Authority (IFA) and is a member of the Illinois Broadband Deployment Council.  The IFA is one of the nation’s largest state-sponsored bond issuing agencies, while the Broadband Deployment Council works to ensure that advanced telecommunications services are available to all the citizens of Illinois.  Mr. Brandt has written for a number of publications spanning a broad spectrum of thought, ranging from Maclean’s,Canada’s Weekly Newsmagazine, to Corporate Board Member and Urban Land.  He is a frequent commentator on topics of corporate restructuring, bankruptcy, municipal insolvency and related public policy issues, and regularly appears on a host of both cable and broadcast outlets.  He serves on the Advisory Board for the Institute of Governmental Studies at the University of California at Berkeley and on the Board of Trustees at Loyola University Chicago.